After the miscarriage I was surrounded by dead-baby flowers, dead-baby books, and lots of boxes of dead-baby tea. I felt like I was drowning in a dead-baby sea. My mother didn’t know how to help but knew that I needed her. She sent me a soft bathrobe and a teapot, and I wept for hours on the phone with her. Mostly, she listened as I sorted through all my thoughts and feelings. If I’m angry or upset about something, or even if I’m happy about something, it isn’t real until I articulate it. I need a narrative. I guess that’s something Jeff and I share. We both need a story to fit into. The Burton ability to turn misfortune into narrative is something I’m grateful I was taught. It helps me think, Well, okay, that’s just a funny story. You should hear my father talking about his mother and those damn forsythia bushes.

My sisters-in-law sent me lovely, heartfelt packages. Christina sent me teas and a journal and a letter I cherish. She included Cheryl Strayed’s book Tiny Beautiful Things: Advice on Love and Life from Dear Sugar. Christina is a mother. I felt like she understood the toll this sadness was taking on me, and she encouraged me to practice self-care. Jess gave me the book Reveal: A Secret Manual for Getting Spiritually Naked by Meggan Watterson and some other books about the divine feminine. She knew that there was nothing she could say, but everything she wanted to articulate was in those books. Jess has always had an almost psychic ability to understand my inner voice. She is quiet and attuned to what people are really saying rather than what they present to the world. I knew her book choices were deliberate, but I couldn’t read them for a while because they were dead-baby books.

If people weren’t giving me dead baby gifts, they wanted to tell me dead-baby stories. There’s nothing more frustrating than someone saying, “Well, welcome to the club. I’ve had twelve miscarriages." It seemed like there was an unspoken competition between members of this fucked up sorority. I quickly realized this is a much bigger club than I knew and that everyone had stories and advice. And as much as I appreciated it, I had to find my own way. 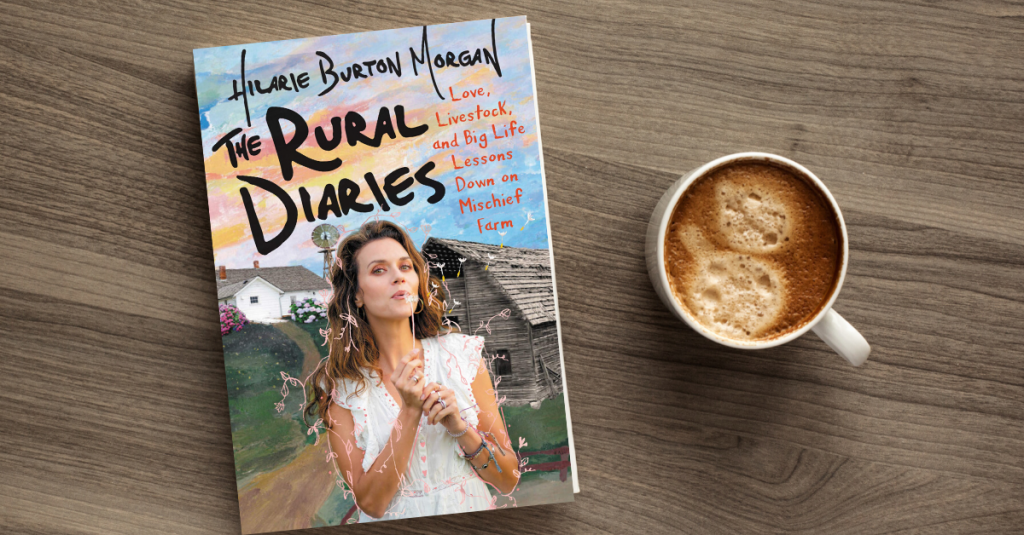 Tara gave me a book called Vessels: A Love Story, by Daniel Raeburn, about his and his wife’s experience of a number of miscarriages. His book helped because I couldn’t wrap my head around Jeff’s side of the story, and he certainly wasn’t telling it to me. He was out in the garage until dinnertime every day. He would come in, eat, help Gus shower, and then disappear for the rest of the night.

That spring The Good Wife was canceled. We had banked on that being a job Jeff would do for a couple of years, one that would keep him in New York City. Then he landed Negan on The Walking Dead, and suddenly he would be all the way down in Georgia for the next three to five years.

We were never going to have another child. It had been so hard to get pregnant. I felt like I was pulling teeth trying to coordinate dates when Jeff would be around and I’d be ovulating. It felt like every conversation was about having a baby.

He’d ask, “What do you want for dinner?"

“Hey, what do you want to do this weekend?"

We tried to fill the house with life. Right before Gus’s birthday in March, I came home to find a huge metal tub in our living room. “Surprise!" Jeff said.

“What the hell is this?" I asked. Peering down into the tub I spied two fluffy little creatures. One was clearly a duckling. The other?

“That little duck is sick," Jeff explained. “Ed was gonna get rid of him, so I said I’d take him." Taking a closer look, the second strange creature was indeed a duck, but its poor neck was bent at an unnatural angle such that its head seemed too heavy for its body. With its head constantly upside down, walking was out of the question. On top of that oddity, poor baby duck also had an outrageous tuft of thick black downy feathers on its head.

“What are we supposed to do with it?" It was just like Jeff to bring animals home without a solid game plan. “Is it gonna die?"

“I don’t know! I just wanted its last days to be pleasant."

“Well what about the other one?"

“I wanted him to have a friend." It was sweet. And also smelly and messy and a big pain my ass. But I couldn’t argue with where his heart was. That poor deformed baby could barely eat or drink. He just sat there with his buddy, drawing comfort.

I hit Google hard. Upside-down duckling head. Weak-neck duckling. Broken-looking-neck-duckling. After a bit of exploring, I hit pay dirt. “Babe," I yelled from the living room. Jeff popped his head in from the outside.

“It’s just a vitamin E deficiency! We can put it in its water."

“Are you serious?" And with that, he was off to the drugstore.

Within a week, our sweet broken duck had a name – Norman, after his crazy hair that reminded Gus of the movie ParaNorman – and a tall straight neck. He could move around and eat and drink. It was a huge win for us. Life was precious. We had saved this little guy.

Jeff left for Georgia, and the ducks grew bigger and no longer fit in the container he’d brought them home in. So my beautiful new claw-foot tub became their home. Gus would invite friends over to see them swim in the tub and give them treats. Every single day I’d clean out the shavings and endless duck poop. It was hard not to see it as a metaphor: make something beautiful for the baby you thought you were gonna have and then watch it get shit all over. But, for what it was worth, I loved the ducks. Gus and I held them and stroked their glossy feathers. 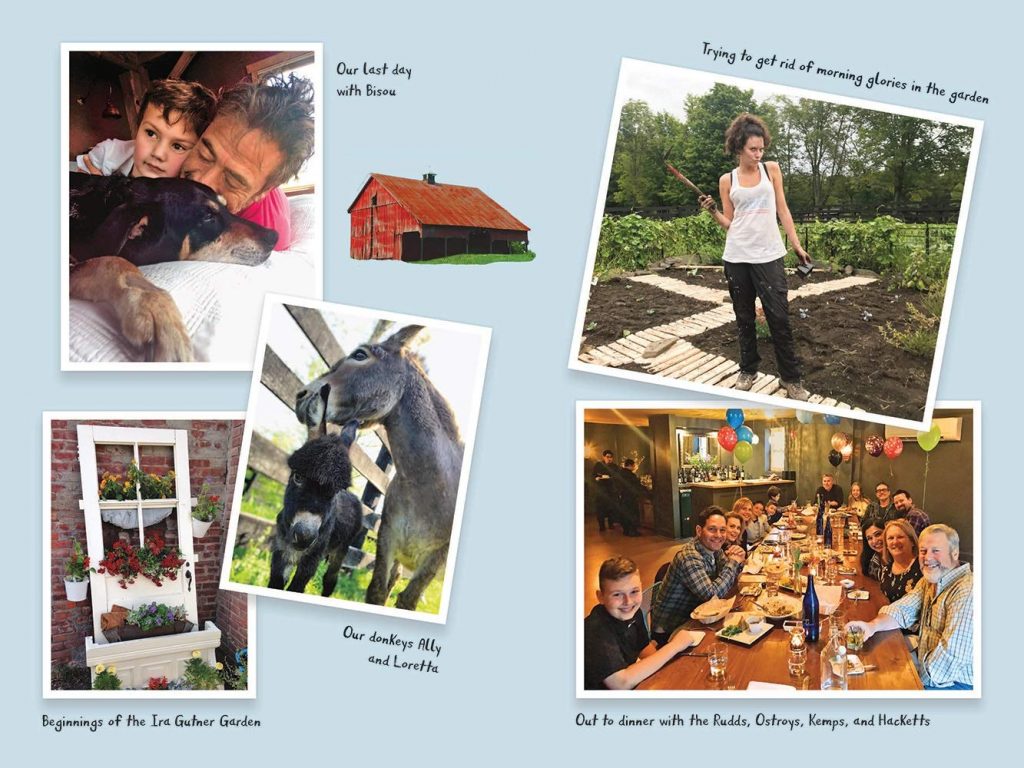 Alice gave birth in April, a couple of days before Jeff’s birthday. Ed had told us that she would wander off on her own when she was ready. So one sunny Saturday when we didn’t see her out in the back pasture, we raced with Gus along the fence line until we found her. She rocked her body against the fence, scratching her butt and bearing down. We stood a distance off, not wanting to interfere with her process. And then, very quickly, without a sound, a huge sac dropped from her and Gus’s eyes went wide.

“That’s the baby, dude." Alice went to work, licking the embryonic sac until her soggy, red-haired baby emerged. We stayed there, the three of us, for a long time. We stayed while Alice groomed her baby. We stayed as the baby slowly climbed up on its rickety new legs. We stayed until we got a good look and declared, “It’s a boy!"

“What are we naming him, Gus?"

There was no hesitation: “Alexander!"

It was springtime on Mischief Farm. Babies were everywhere. Baby chicks at the feed store. Baby dairy cows in the field. Baby bunnies and foxes in our woods. But the things I used to delight in now served as a reminder of how broken I felt. Jeff was home, but I was avoiding him. We didn’t know how to talk to each other. The things I needed to hear, he didn’t know how to say; and the things he needed me to be, I couldn’t be. We moved around the same spaces, but not together. He wouldn’t enter a room until I left it. I wouldn’t tell him where I was going; I’d just leave and hide out in the garden or in town. I was just a vessel, and I was empty. Any energy I did have was going to Gus; I had nothing left for Jeff.

I took a job for a few weeks filming a movie out of town. I needed that. With Gus at my side, we drove across the Canadian border to Montreal, where we didn’t think about the farm or babies. We practiced our French and went to museums and shows and relished being pedestrians. For three whole weeks, we were city people. Jeff was down in Georgia working. We couldn’t have been further apart.

Coming home in May, I hit the ground running. I couldn’t feel anything if I kept busy, so I became the most task-oriented person in town. The garden I planted at Samuel’s was overflowing with blooms. Gus’s class snacks were lavish Pinterest-worthy creations. My garden was incredibly tidy. All the little sprouts of weeds were targets for my suppressed emotions. Kill kill kill.

I worried Jeffrey. I knew I was a shell of myself. I knew that he could see it. So I avoided him.

He found me down in the garden one day. I had collected a heap of rocks that were left over from a landscaping project. Pulling them out, one by one from the back of the Rhino, I was laying a path through our large vegetable garden that would allow me easier access to our snap peas, beans, tomatoes, and cucumbers at the back of the garden. I’d pinched my hand between two large stones and blood caked my knuckles.

“Talk to me," he said, hands shoved deep down in his pockets.

And as we talked, he started helping me. He stood and went to get a whole bunch of rocks, laying pathways through the garden for me. Each path was a manifestation of what he was saying. We worked on this garden together.

Excerpted with permission from the book The Rural Diaries: Love, Livestock, and Big Life Lessons Down on Mischief Farm by Hilarie Burton Morgan.